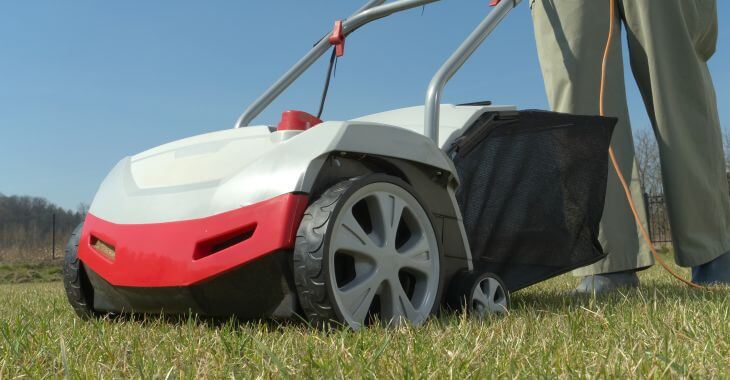 Thatch is the layer of dead grass and debris that can accumulate over the roots of your lawn’s grass. When thatch becomes too thick, it can suffocate your grass roots and keep water, air and nutrients from penetrating the soil. Dethatching your lawn can break up a thick thatch layer to aerate soil and allow air, water, fertilizer and other substances to reach grass roots. To perform dethatching, you need dethatching lawn equipment. What is a dethatcher and how can it benefit your lawn?

Thatch can be beneficial to your lawn as long as it is not too thick – it provides insulation and protection for the grass roots and soil just like mulch. But when thatch is too thick, usually an inch or more in depth, it can be suffocating. This means dead grass is collecting quicker than it can decompose. This can cause a host of problems for your lawn. Too much thatch can result in under-nourished grass and increased risk for fungal and pest infestations. When thatch is too thick, dethatching lawn equipment is needed for removal.

Dethatching is simply removing thatch. This can be done in a variety of ways. The manual option is using a rake to remove the layer of decomposing organic material on top of the soil on your lawn. This can be used for mild or moderate layers of thatch, but it does take time and effort. If you have a large lawn, it can be a lot of work. Another option is using a dethatcher, which can make the job much easier.

There are also mechanical dethatchers that are used for commercial lawns or for extremely thick thatch. Very few homeowners own this type of dethatching lawn equipment – most homeowners would need to rent this type of equipment or hire a landscaper that owns this specialized dethatcher.

Does My Lawn Need Dethatching?

You can usually tell if your lawn needs dethatching by watching for the signs. The lawn may feel spongy under your feet due to the layer of decomposing debris. Your lawn may have brown spots, or it may be thinning. You can check the layer of thatch yourself by removing a small patch of grass, thatch and soil. If the thatch is about an inch deep or thicker, your lawn needs dethatching.

How to Perform Dethatching

Regardless of whether you use a rake or a dethatcher, there are similar steps to take when dethatching your lawn. First, you need to choose the best time of year for dethatching. You want to dethatch when your grass is in its main growth season to allow it to flourish. For cold-season grasses, this is early spring or late fall; for warm-season grass, it is best to perform thatching in late spring when grass is at its peak growing season.

When you are ready to begin dethatching, lawn preparation begins with mowing. You want to cut the grass to allow easy access to the thatch – it is best to cut it short, about half the normal height. Once the lawn is mowed, you can use your dethatcher equipment. The goal is to pull up the thatch to reveal the soil for easier penetration of air, water and nutrients to the grass roots. Once the thatch is loose, you will need to rake it up and remove it from the lawn.

In some cases, lawns with thick thatch may also have compacted soil that is contributing to deteriorating lawn health. Dethatching alone may not be enough to fix the issue. After dethatching, core aeration may be needed to aerate and loosen the soil, which requires mechanical equipment. If you need core aeration and dethatching at the same time, it is best to hire a landscaper that has access to this specialized equipment. 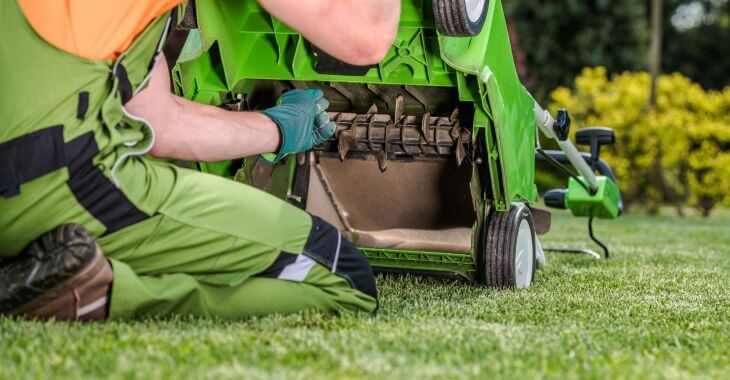 Restoring a Healthy Lawn After Dethatching

If you had thick thatch, you may have thin or bare spots in your lawn. After dethatching, it is a good time to overseed thin areas or bare patches to restore a thicker, healthier lawn. This is also a good time to fertilize your lawn to bring it back to optimum health.

If you ever asked, “What is dethatching?” or “What is a dethatcher?” now you know. Dethatching your lawn does not need to be done often, but it can be a lot of work. You can make sure it is done right and save yourself the effort by hiring a landscaper with the right dethatching lawn equipment.

Getting Your Yard Ready For Winter

Tips for Repairing Dead Spots in Your Lawn